The European Union is now seeking to criminalize people who are being charitable to refugees arriving on boats, reports The Times. With people smugglers now outranking pedophile rings in the crime stakes those good people in Greece who help migrants ashore and give them dry clothes and food are clearly accomplices. People smuggling must be stopped and these people’s compassionate humanity is now deemed part of the problem.

Here we see a stark example of the state’s underlying psychopathic nature, devoid of empathy. When our actions are legislated instead of voluntary the feedback loop is cut between stimulus and response, which is where empathy resides. Like allopathic medicine the state cares little about causes, seeking mainly to suppress symptoms. Forget about the wars we started and fearsome groups we trained and funded; forget the once stable countries now riven by rival factions following “regime change” and the gift of democracy. Yeah, let’s hit those friggin’ people smugglers – they’re the problem!

What have these evil men done? Their crime is helping desperate people flee a war zone, people who are prohibited from boarding normal ferry services or air flights due to lack of papers. Often criminals by trade, I doubt they are nice guys, but their customers willingly take the risk. Of the 1.8 million illegal refugees entering Europe in 2015, mainly by sea, 3,770 drowned. Each one is a dreadful tragedy but when you do the maths, 998 out of 1000 illegal migrants get through alive. On a legitimate ferry service those odds are unacceptable but those fleeing a war zone are disallowed that, and will pay twenty times the fare and take a thousand times the risk. Now the Council wants smuggling upgraded to the status of people trafficking, when the two are clearly opposite ends of the spectrum. You usually pay to be smuggled and are free thereafter, whereas trafficking is akin to slavery. Yet the Council argues equivalence and can charge all those involved in smuggling without needing to show financial gain, unlike in a charge of trafficking.

This war on people smugglers will be a good earner for some. In their depiction of people smuggling as the scourge of our age they want all Member States to undertake a “comprehensive, multidisciplinary and cross-border approach” – this to combat some Turkish gangsters with a supply of inflatable boats. Across Member States this will co-ordinate different agencies “including law enforcement and judiciary authorities, labour, social, health and fisheries inspectorates, border forces, immigration services, local and regional governments, tax authorities, NGOs, businesses, trade unions, employers’ organisations and embassies.” One suspects that NATO member Turkey could at a stroke end the people smuggling but that would be far too simple, and kill a high-profit business that is, let’s face it, helping desperate people escape the horror.

Tony Bunyan, Statewatch Director, comments:“The Council proposals would criminalise NGOs, local people and volunteers who have worked heroically to welcome refugees when the EU institutions did nothing, while other plans would require them to “register” with the police and work within state structures. In a humane and caring EU it should not be necessary to “register” to offer help and care to people who have suffered so much already.” See the full Statewatch report here:

I am often criticized for being naïve when I suggest that human charity would be capable of covering our social responsibilities better than the state, if needs were to be. Friends of mine brought to life the Refugee Community Kitchen in Calais last November, which is completely self-funding and puts out over 2000 meals a day. Watch the video and do remember, this is people being human. So I love these examples of human charity rising to a challenge – despite half its income already being consumed in taxes. Think how it could be with all our resources to hand, without our taxes being used to obstruct their efforts.

In my book The State Is Out of Date, We Can Do It Better, I explore just how and why humanity is good at coming up with solutions that resolve problems instead of feeding upon them. It’s a book for those who realize politics isn’t working and wonder what would. The answer is staring us in the face and so simple it is difficult to grasp.

Now that we see the looming likelihood of  collapse of the Euro, perhaps it is time to take a longer view. I was very happy, at the time, when Britain alone chose to stay outside the Eurozone. After witnessing first hand the appalling effect of the Common Agricultural Policy upon the diet and landscape of Europe (see below), it was scary to think that the same idiots were going to run the monetary system.

Now that the entire edifice of a ‘united’ Europe is threatened by collapse of the Euro, I am reminded of my realization many years ago when Britain joined the community. This was that the European Union has finally managed to create that to which Napoleon and Hitler aspired. They have united us all under the rule of a group of unelected Commissioners who seem intent upon grinding us down under their bureaucracy.One must wonder just how much irreparable economic damage will result from desperate and doomed attempts by the Commissioners to prop up their ill-planned currency?————————““I wished to found a European system, a European Code of Laws, a European judiciary: there would be but one people in Europe.”  Napoleon in 1810, his dream now achieved.
In my book, The State is Out of Date, We Can Do It Better, I list some of our harvest from the Common Agricultural Policy:* It counters our evolutionary change to a healthier diet, by interfering with the essential and effective feedback loop supplying information from the consumer to the producer. Subsidizing farmers and producing according to central decision-making badly interferes with the natural information exchange. The Soviets tried to do it.* It encourages the introduction of toxic chemicals to our ecosystem through supporting and subsidising food production beyond society’s demands. Much of the use of toxic chemicals and treatments is, when not mandated, certainly encouraged by the state’s guarantee to purchase, or subsidize the sale. This lowers the quality of our food.* It is responsible for the surplus of cattle that were fed back to themselves, a 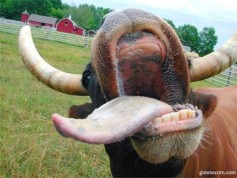 s a means of reducing the “beef mountain.” This created the conditions for the growth and spread of BSE (mad cow disease). The original cause of this modern tragedy is the intervention of the state in our food chain. The main alternative theory, put forward by organic farmer Mark Purdey, points to the effects of a state-imposed painting of all British cattle with a highly toxic organo-chloride potion covering the head and spinal column.* It has been cited by regular studies as unworkable, corruption-prone and grossly inefficient since the early 1980’s. Literally billions of pounds, our pounds, are scammed and lost every year as this out-of-control creation of Brussels gets on with its regular job – which itself has little merit.